I’m one of the Young Composer’s taking part in the project. I thought I’d do a brief post on how my composition is coming along so far! Last session (Sunday 19th January) was the first time we began to think about our main compositions to be performed in a few weeks. I think for me, the hardest part of composing is coming up with the initial idea’s, or deciding which pathway to take. I was finding it hard to narrow down options. My first ideas included a solo piano piece, an exploration of the different era’s of music all in one piece (I decided this was a bit too intense!), and music for an animation. I eventually decided on the animation option because it’s something i’m really interested in, together with film music.

The animation I have selected is called ‘Fluxtion’ and quite simply follows the growth of a tree and a bird eventually flying out of the tree. My ideas so far include:
-Melodically reflecting the growth of the tree through ascending motifs
-Maintaining a light and delicate approach by sustaining chords on the piano, double bass and viola
-Using the clarinet and flute to play the melodies due to their innocent timbres
-Using a balance of dissonance between the underlying harmonies and melody whilst still having an overarching sense of tonality

My progress so far involves planning some of the composition on Sibelius (after having imported the animation.) I found the brainstorming process quite stressful, but now I have some ideas I am excited to carry on working on the project. 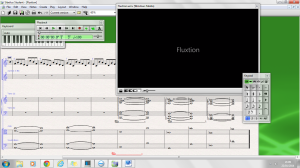 Kirsty has given me some great ideas and has sent me some really useful material  such as Messiaen’s Quartet for the End of Time movement III (Abyss of the Birds) to help with the process.